Welcome to the Ohio Committee For Severe Weather Awareness

Please Note that you are viewing the non-styled version of the Ohio Committee For Severe Weather Awareness website. Either your browser does not support Cascading Style Sheets (CSS) or it is disabled. We suggest upgrading your browser to the latest version of your favorite Internet browser.

Winter Safety Tips For The Home

Winter Safety Tips For For The Vehicle

From NOAA and the National Weather Service

The National Weather Service (NWS) is responsible for issuing winter storm warnings, watches and advisories to alert the public when dangerous winter conditions are expected. 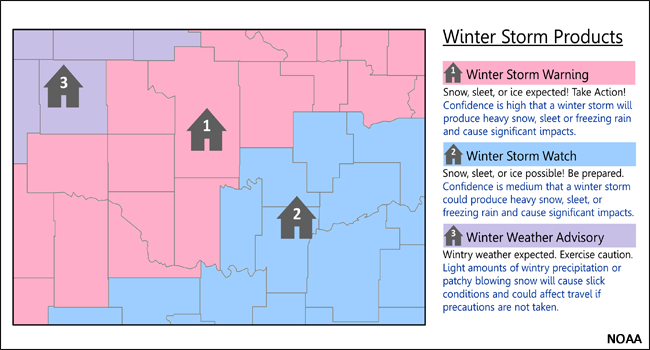 Freezing Rain - Rain that freezes when it hits the ground, creating a coating of ice on roads, walkways, trees and power lines.

Sleet - Rain that turns to ice pellets before reaching the ground. Sleet also causes moisture on roads to freeze and become slippery.

Wind Chill - A measure of how cold people feel due to the combined effect of wind and cold temperatures. The wind chill index is based on the rate of heat loss from exposed skin. Both cold temperatures and wind remove heat from the body; as the wind speed increases during cold conditions, a body loses heat more quickly. Eventually, the internal body temperature also falls and hypothermia can develop. Animals can also feel the effects of wind chill.

Blizzard Warnings are issued for frequent gusts greater than or equal to 35 mph accompanied by falling and/or blowing snow, frequently reducing visibility to less than a quarter mile for three hours or more. A Blizzard Warning means severe winter weather conditions are expected or occurring. Falling and blowing snow with strong winds and poor visibilities are likely, leading to whiteout conditions making travel extremely difficult. Do not travel. If you must travel, have a winter survival kit with you. If you get stranded, stay with your vehicle and wait for help to arrive.

Winter Storm Warnings are issued for a significant winter weather event including snow, ice, sleet or blowing snow or a combination of these hazards. Travel will become difficult or impossible in some situations. Delay your travel plans until conditions improve.

Ice Storm Warnings are usually issued for ice accumulation of around 1/4 inch or more. This amount of ice accumulation will make travel dangerous or impossible and likely lead to snapped power lines and falling tree branches. Travel is strongly discouraged.

Wind Chill Warnings are issued for a combination of very cold air and strong winds that will create dangerously low wind chill values. This level of wind chill will result in frostbite and lead to hypothermia if precautions are not taken. Avoid going outdoors and wear warm protective clothing if you must venture outside.

Wind Chill Watches are issued when there is the potential for a combination of extremely cold air and strong winds to create dangerously low wind chill values.

Winter Weather Advisories are issued when snow, blowing snow, ice, sleet, or a combination of these wintry elements is expected but conditions should not be hazardous enough to meet warning criteria. Be prepared for winter driving conditions and possible travel difficulties. Use caution when driving.

Wind Chill Advisories are issued when low wind chill temperatures are expected but will not reach local warning criteria. Extremely cold air and strong winds will combine to generate low wind chill readings. If you must venture outdoors, take precautions against frostbite and hypothermia.

What is the Polar Vortex? 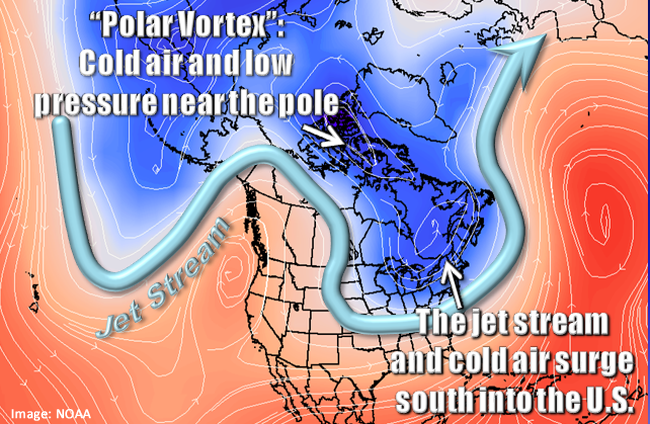 The polar vortex is a large area of low pressure and cold air surrounding both of the Earth's poles. It always exists near the poles, but weakens in summer and strengthens in winter. The term "vortex" refers to the counter-clockwise flow of air that helps keep the colder air near the Poles. Many times during winter in the northern hemisphere, the polar vortex will expand, sending cold air southward with the jet stream (see graphic above). This occurs fairly regularly during wintertime and is often associated with large outbreaks of Arctic air in the United States. The one that occurred January 2014 is similar to many other cold outbreaks that have occurred in the past, including several notable colder outbreaks in 1977, 1982, 1985 and 1989.

There are several things the polar vortex is not:


In short, there is no cause to be alarmed when you hear about the polar vortex, but you should be prepared for colder temperatures. Check the forecast for your area on weather.gov to ensure you are dressed appropriately. It is also a good idea to check the items in your home and car emergency kits at the beginning of each winter season to ensure you are prepared for any type of hazardous winter weather.

What are El Niño and La Niña? 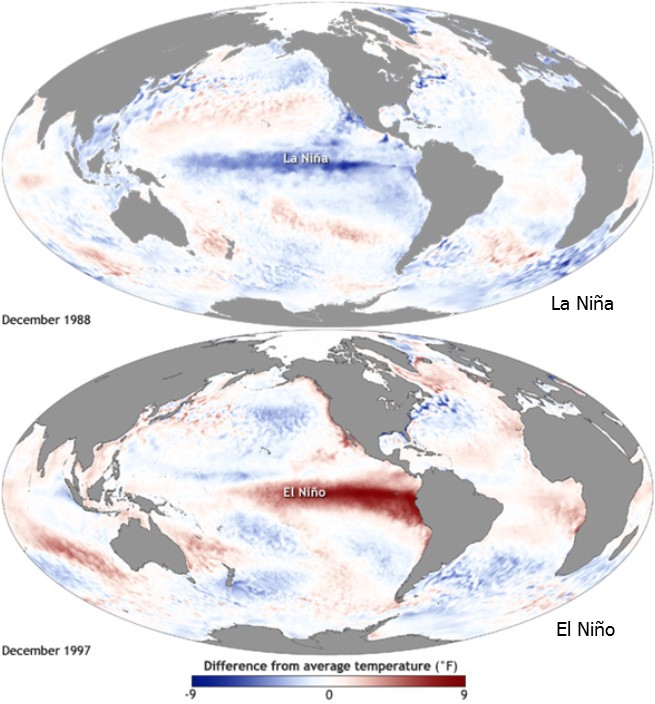 El Niño and La Niña are opposite phases of a natural climate pattern across the tropical Pacific Ocean that swings back and forth every three to seven years, on average. Together, they are called ENSO (pronounced "en-so"), which is short for El Niño-Southern Oscillation.

The ENSO pattern in the tropical Pacific can be one of three sates: El Niño, Neutral, or La Niña. El Niño (the warm phase) and La Niña (the cool phase) lead to significant differences from the average ocean temperatures, winds, surface pressure and rainfall across parts of the tropical Pacific. Neutral indicates that conditions are near their long-term average.

El Niño and La Niña alternately warm and cool large areas of the tropical Pacific - the world's largest ocean - which can significantly influences where and how much it rains there. The primary location of moist, rising air (over the basin's warmest water) is centered over the central or eastern Pacific during El Niño and over Indonesia and the western Pacific during La Niña.

This shift disrupts the atmospheric circulation patterns that connect the tropics with the middle latitudes, which in turn modifies the mid-latitude jet streams. By modifying the jet streams, ENSO can affect temperature and precipitation across the United States and other parts of the world. The influence on the U.S. is strongest during the winter (January-March), but lingers into early spring.

The influence of El Niño and La Niña in some parts of the U.S. and the rest of the world can be so strong that they increase the odds of "extreme weather events" - phenomena that rank in the highest or lowest 10 percent compared to historical observations.